I’m walking on the Michigan Flyer,  looking for a spot to sit, annoyed because I’m hungry and tired and have a raging headache, only to be to be more annoyed when I see the number of people on the bus.

(Note to self: Don’t take flights on Thursdays apparently, lol)

I finally find a seat and hear this weird music, that sounded like it was classical or not even that, but, something I don’t hear everyday. At first I thought it was a passenger blaring their music on speaker but, then I finally realized it was playing on the main speaker on the bus. Then, I remembered I had my ear buds in my carry-on so I put those in and turned on Pandora.

I ended up dozing off for a little bit, and then realized we were at the first stop on the way to the DTW Airport. It took me a minute to adjust my eyes to the sunlight and when I looked outside I was again annoyed for how many people I saw standing, waiting in line. I was annoyed because the Michigan Flyer is never this busy. And I like that way, LOL.

Anyway… As I watch people start to board the bus I am totally that person who avoids eye contact with people in hopes they won’t sit by me. Thankfully (?) my natural face just says “you can’t sit with me” and people pass by me. Okay, so maybe I shouldn’t feel “thankful” for having a bitchy face but it definitely works in my favor sometimes. Ha!

After the first stop I attempt to doze off for a little bit longer before we get to my stop at the airport but at that point I was just ready to get there so I could find a bathroom. Lol. The bus had one but I couldn’t bring myself to use it. So we finally make it to the airport and as always, I’m there super early. You know how they say to be there two hours early? Well I am always there two hours early. I’drather be super early and bored than late and rushing, feeling stressed.

I go check my luggage in and see the security line and freak out. It is SO long. I mean, I’ve seen long lines but not quite like this. Of course, I figure with it is this long that TSA will somehow get it moving right along but boy, was a I wrong. Then, I see a bunch of women MSU players and ask one of the girls what sport–softball. I thought it was cool and told them I’m from the East Lansing area (well, close enough). But, within a few minutes I was suddenly annoyed, still technically from before, lol, that I was stuck standing in a line that wasn’t moving because these girls were super squealy and just plain obnoxious. Of course, maybe I wouldn’t have found them AS annoying had I had some food or at least coffee in me.

At last it was my turn to go through the body scanner and I had a necklace on I had to flip so it was on my back, and then afterward had to get a back pat down. Just my back because of my necklace. It was weird but, I obliged and then was finally on my way to the bathroom, get food, and eventually to my gate.

I realized I still had a ton of time to kill and it seemed like everyone was hungry, wanting a drink, or both and we’re taking over Ruby Tuesday and TGI Friday. I decided I would get something to eat at Earl Of A Sandwich like I originally planned because I hadn’t had it since last year when I was at the airport, and before that not since 2013. Damn. 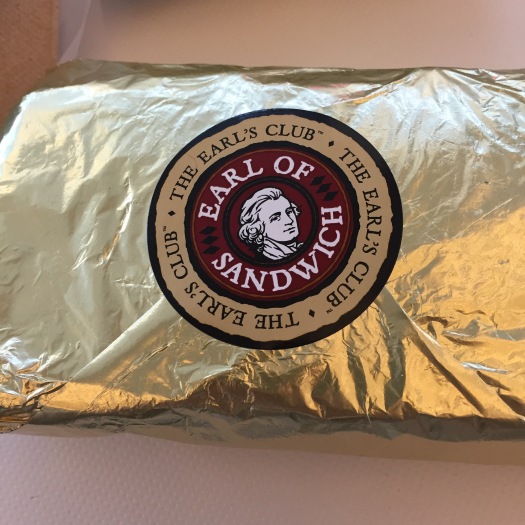 After I ate I went to get coffee only to get to the coffee place and have them notify me they were out of vanilla and caramel. (I wanted vanilla) I decided to pass on coffee, for now, and wandered back to Ruby Tuesday. I can see the restaurant is packed and some people waiting in line but I figured I would ask the hostess anyway if there was by chance an open spot at the bar. She advised me there wasn’t, at least not to sit, but that if I wanted to I could stand. At that point I was desperate for a drink so I agreed and went to the bar. Of course with it being so packed and me being short it took me longer than hoped to get a drink. I ordered a beer, thinking it would be in a bottle or a small glass only to be handed a BIG glass. I accepted and got my bill, and was shocked at how much my beer was. I paid and stood awkwardly by the bar hoping someone would soon get up and leave but it looked like no hope was in sight. 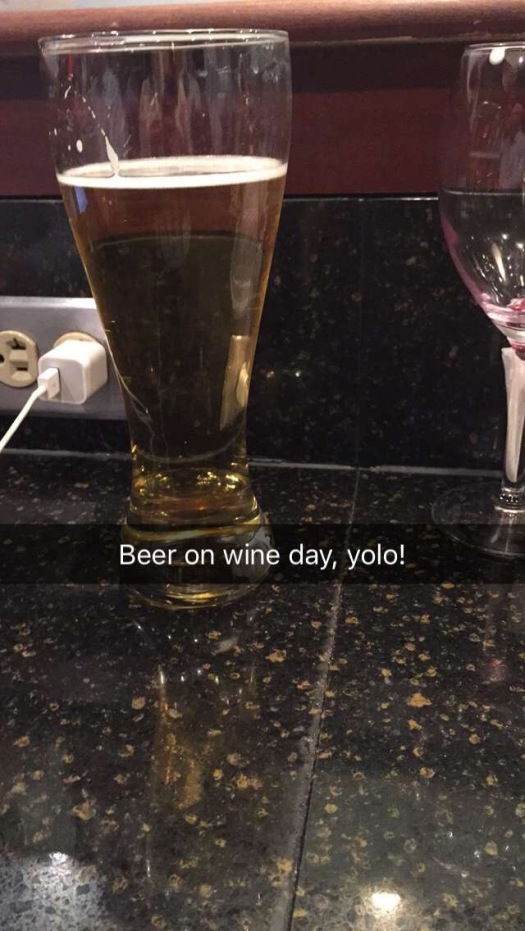 But, finally someone left and she let me have her seat and I ended up sitting next to this man and woman (who, by the way, didn’t know each other) who were both on their way to Texas. The woman though had a connecting flight in Nashville so she was actually on my flight. The man called me “kid”, twice, which I couldn’t help but think was odd considering I don’t think of myself as a “kid”, but, maybe he thinks he’s old enough to be my dad? Which, he probably was. LMAO! Anyway…

He was super friendly, chatty. I personally was just trying to get service to surf Facebook and Twitter and expressed my annoyance out loud for not being able to connect. The man heard me and offered to let me connect to his Wifi. I happily accepted and finally decided to be quit being a Scrooge and talk to him. Lol. He asked me what I did for a living and told him I was a reporter and how I had my first live shot experience last week and totally butchered it. I told him it was rather entertaining and that if he really wanted to watch it, he could, at the HOMTV website. I told him there was one condition though–he had to watch it later when I wasn’t around. LOL! God only knows what he thought but as embarrassing as it was, I know practice will only make perfect so the more often I do it, the better I get. Which, speaking of, my next live report is next week so be sure to tune in. Or, you know, don’t, and save me some pressure. HAHA! Also, at some point, probably when I’m not on vacation, I’ll blog about my experience of my first live report. But that’s for another time…

After I finish my beer I head to my gate and am again surprised with how many people are on this flight. Then I’m even more mad at myself for not getting early bird check in so I could have been in the A boarding group and could have gotten a better seat. But I didn’t so I waited until it was boarding group B’s turn and by the time I get on the plane it is packed with everyone doing what I would have done–sitting in the window or aisle seat, all the middle seats empty. I keep making my way to the back in hopes that maybe there is still an aisle seat and just when I think there is one, I look in the aisle and realize it’s a dad and his baby in a car seat next to him. I’m thinking, really?! You’re killing me! Lol. Which, funny enough, I had just been telling my mom earlier that day that I wish they had separate flights for babies and adults. But that’s another story. So it’s getting close to being time to leave and I settled on sitting BEHIND the baby (genius idea. Note: sarcasm) with this mom and her daughter. They were friendly and the girl had a Central Michigan University bag and I asked her if she went there but I found out she was a senior in high school and had just taken a tour. I told her I was an alumni of CMU and how much I loved it but, I think she had her mind made up on another school.

The flight itself felt like the shortest flight I’ve ever been on to Nashville. It was nice but, I brought all this stuff in my carry-on thinking I would need to kill time and it turns out, I didn’t.

So I land and find my way to Kayla and we head to a bar near her house and get a glass of wine seeing as it was National Drink Wine Day and so of course we couldn’t resist. We watched the MSU game and by the end of the night exchanged MY number (thanks, Kayla, lol) with a guy sitting next to us at the bar. That was entertaining to say the least. But after that we finally called it a night and came back to her house, which I was SO, SO excited to see and felt like a little kid on Christmas, lol. It’s a stunning house and the guest bathroom makes me feel like I’m a hotel. So, good job on the design and decor, Kayla.

So it’s Friday now*, which means Kayla is at work (boo) and I am at her house currently watching Law And Order: SVU, and so it’s almost like I’m back at home because this is what I would be doing if I actually were at home. Lol! It’s currently sunny outside and 67 degrees out! Can you believe it?! It’s so refreshing to look outside her front window and NOT see snow. (I’m referring to you, Michigan) Think we’re headed to downtown Nashville tonight and I am so excited! I can’t wait! I have my party pants on so I hope Nashville is ready for us! 💁🏻

***Side note: I apologize for any grammar and spelling errors as I typed this on my phone and it kept changing words. I tried my best to catch them but, I’m not sure if I got them all.

Because we’re all recovering from something.

Understanding ourselves and the world we live in.